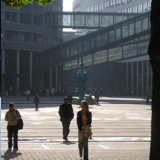 Previously, in Volume 1: The Attack Sybil got her hands on The Necronomicon, the book of the dead. Her arch nemesis, the Reaper, can no longer create new zombies for his army. But unfortunately, Ex-CIA agent, Harry Brown, kidnapped her friends, and now she has to trade the infamous book for her friends.

At the same time, Jack Hunter—head of the ATU (Anti-Terrorism Unit)—discovers one of his agents is leaking information about the bomb explosion in London. Is his agent working for Harry Brown?